“Carcassonne?”
“Isn’t that a boardgame?”
“Is that the former strategic medieval stronghold in the South of France?

The answer to all of those questions, is yes. Recently, Toby took a 3 day jaunt to the city and has the following recommendations.

“Tres bien!” this doesn’t mean “very beany,” but it should when referring to Carcassonne’s local dish the Cassoulet.

Cassoulet is a stew packed full of haricot beans, saucisson (sausage) and duck. I found this on the evening of my arrival at the Brasserie Les Platanes in a square near the local cathedral.

Sadly, still fatigued from travel, I forgot to take a photo, but I have found the nearest approximate image on Google.

This brasserie was by no means special, but it served up simple, hearty fare for a low price.

As you can see from this TripAdvisor review, CityBill from Farnborough came here twice on a two day holiday he liked it so much!

Well, I did exactly the same thing when I discovered “L’Escargot,” except I had no one to slap in the face.

After my initial disbelief gave way, I rapidly ordered a number of dishes, including figs with camembert and bacon, beef on skewers and potatoes with BBQ sauce (what?!)

However, the pick of the bunch, for this Francophile were the snails, the cheese board and the red wine, “Ni Ange, Ni Demon” – Neither Angel Nor Devil.

If there’s one restaurant you should visit in Carcassonne, it should be L’Escargot.

Close to la Gare (the station) and the canal, stands Le Bistro D’Agustin a typical French-style eaterie. It offers a number of formules (or meal deals, much like Boots would in the UK) – but I chose to go a la carte.
I opted for the souris d’agneau – lamb shank. It may not look particularly appetising, but the delicious sauce and tender meat makes this a winner. Served with frites (chips) too. 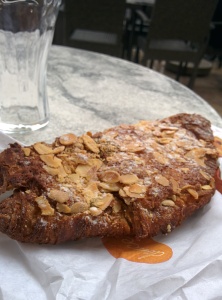 In the new town, Place Carnot is a leafy square full of lively cafés and hosts regular markets.

On a sunny morning, it’s the perfect place for a pastry and a cup of coffee. I grabbed an almond croissant from Briocherie Arpin.

As it happens it was quite a grey morning when I had this. I also don’t like coffee so I had Coca Cola instead.

This “chocolate mousse” from Cafe Pistou in Exmouth Market – was actually more like a “tart.”

With a hard chocolate “crust” at the top, and warm gooey caramel / chocolate centre, it was accompanied by two different creams. This truly is the creme de la creme of desserts in London!