Picture the scene: I arrived in Amsterdam on Monday evening, dropped my bag at my weird AirBnB and headed out into the night in search of food.

Speaking no Dutch other than “hallo,” which means “hello,” I hoped to find a guiding light towards somewhere to dine.

I turned a corner, crossed a bridge and there it was – a road illuminated with red lights coming from doorways and windows.

*tap tap tap* went the lady knocking on the glass of the door to attract my attention. “Oh, terrific,” I thought, a tourist information booth.

“Good evening, I’m looking for something to eat.”

“Mmm, I’d really want dessert and a bottle of wine for that amount. Sounds like a fancy place, although I suppose I would get some good photos for the blog.”

“NO PHOTOS!” she shouted as she slammed the door.

Disappointed that I’d clearly just blown my chance to attend an exclusive Dutch supper club, I continued to wander the streets.

What’s that I spy in the distance? It looks like a series of tables and chairs with people sat eating and drinking. My spidey senses began to tingle. “If that’s not a restaurant, then I’m not a food blogger!” I said to the elderly Dutch man who I’d just knocked off his bicycle.

I entered the courtyard of Café Loetje and a waiter approached me.

“For how many people? he asked.

“Hang on a second buddy! I need to make sure you’ve got over  4.0 rating on Google first. Sorry, two seconds my 3G is going really slow. OK, now we’re down to GPRS, this is really very embarrassing. Let me just click in and out of airplane mode, see if that does the trick. HAHA, my phone must think I’ve just been on the shortest flight ever. Aaaaaaaaaand… 4G! Now we’re cooking my friend. I mean obviously we’re not cooking just yet, but hopefully we will be soon. When I say ‘we’ I mean ‘you’, well, not ‘you’, the chef, unless of course you’re also the chef? 4.2! Bingo! A table for one please.”

I took a table outside as the temperature was a decent temperature for sitting outside. The waiter brought over a menu.

Despite the menu being in Dutch (I never ask for an English menu as I simply refuse to look stupid in these places and give them an advantage) it became clear to me (a seasoned foodie) that this place was very much known for its steak. 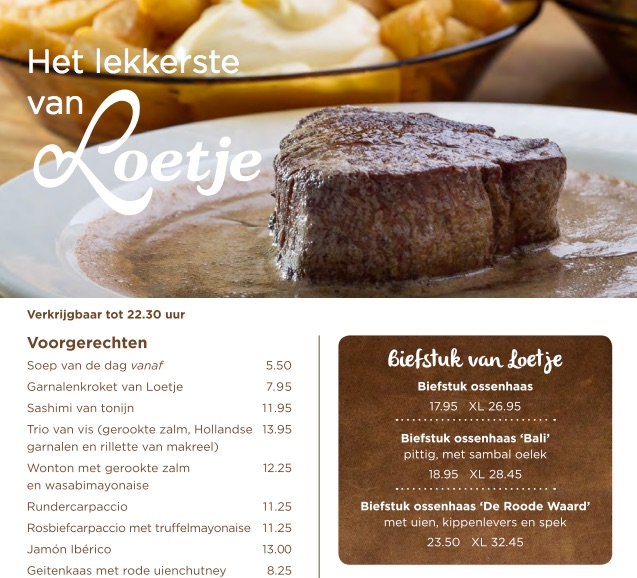 The options that presented themselves were:

Biefstuk ossenhaas ‘De Roode Waard’ – house steak that might call me a dickhead?

I opted for the ‘De Roode Waard’ option, as I adore to be abused by cows. Next thing you know, this is put in front of me.

“What the shitting hell is that?” I hear you cry, (strangely the exact words I shouted at the waiter).

Now, I’m not going to lie, I didn’t have high hopes for this, but those hopes were wrong.

The fillet steak was cooked perfectly, as was the liver.

To be honest, with this plate of food, a lager and some chips in front of me I’ve never felt more of a man – well, apart from the time I went into one of the tourist booths with blue lights.

Five boys out of five!