The Foodie Boys have tired of the restaurant scene of late.

“A table for two please.”

“Do you have a reservation?”

That sort of thing. Boring.

No! Calm down! Be still your beating dicks/fannys. That doesn’t mean our days of blogging about food are over!

No, we’re branching out down some exciting new avenues – or streets as we say in Britain.

We can often be found wandering down British streets to see if we can find something satisfying to fill our stomachs. Fortunately London is full of people hanging about down streets who are happy to oblige.

One such street was ‘Ethalburga Street’ in Battersea.

This was just a snippet of the conversation we had as we walked down Ethalburga street and towards the London Cooking Project which was hosting Ferdie’s Food Lab.

To sum up, we’d been invited to a supper club. The only supper club we’d ever been to before was in Battersea. Do supper clubs only exist in Battersea? We don’t know, but we were delighted to accept the kind offer of our host Simon. 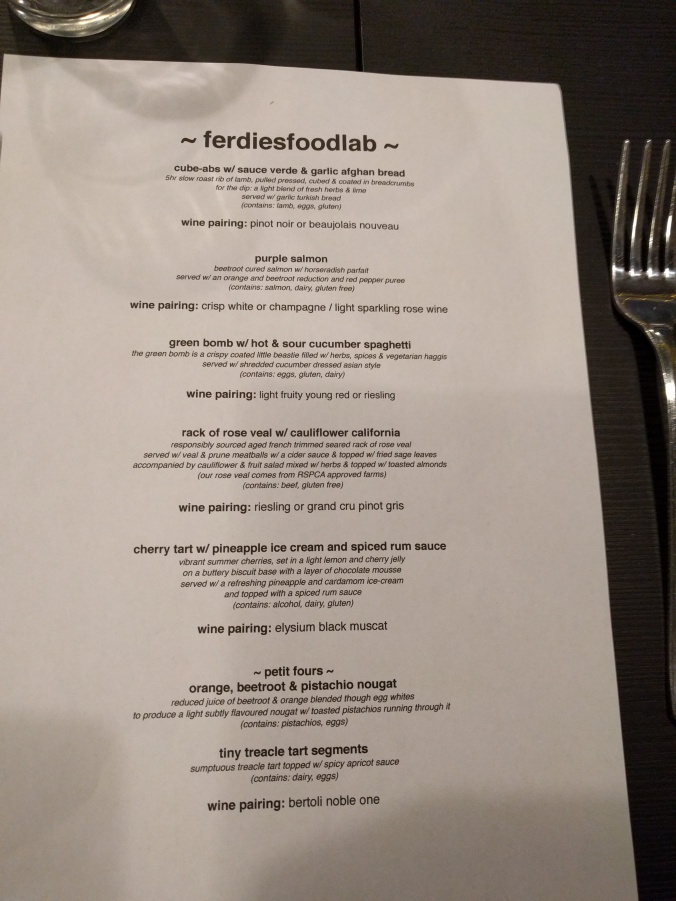 Menu (taken with an Android)

We’d been sent a list of wine pairings for each course before we attended, meaning we could raid the local Asda for Rollbacks. Our wine strategy consisted of one bubbles, one white and one red.

We were bemused to be asked to leave Asda for refusing to stop singing Take That’s ‘Shine’. It was only after we left that we realised that advertising campaign was for Morrisons. A full apology has been sent to Asda head office.

On arrival we met our fellow diners over a glass of prosecco, which was a nice bonus. ‘Met’ here = Tony asking all of them whether they had an iPhone 6 charger. With every person he asked, the haunting realisation dawned on him; we would have to use my Android phone camera to photograph the supper.

Lamb rib (not taken with an Android)

To begin Simon presented us with slow cooked lamb rib in a croquette style thing, dip and garlic Afghan bread – just like grandma used to make. If your grandma was Afghanistani, which fortunately neither of ours are/were (some of them are dead).

The cubes of meat were delightful, and would have probably gone down really well with the suggested wine pairing of Pinot Noir. However, we were busy getting as much prosecco as possible in our thirsty, horrible faces.

After this out came the purple salmon, beetroot and horseradish parfait.

“This will go nicely with the prosecco,” Tony remarked.

Next, a green bomb appeared. We don’t entirely know what this was, but it was nice and the spicy cucumber salad that came with it was a healthy kick in the balls.

The highlight of the dinner was the veal. Which if we had a way with words we would describe here, but believe me, it was very nice.

The chocolate cherry dessert had somewhat fallen apart, and frankly the appearance may have put some people off, but they would have been wrong. It was great.

Of course, a supper club is FAR from all about the food. It’s a social occasion. We were relieved to be placed near another food blogger. Ordinary people just don’t understand how important what we do is.

Flo, one half of Flo & Elle (we can’t comment on the mysterious absence of Elle) came to the rescue, when she offered to send us her photos of the night. This means, aside from the menu picture, we didn’t have to use Toby’s Android phone.

The conversation with Flo flowed, perhaps where she got her name. We discovered a lot about her, much of which we cannot publish here for fear of repercussions.

What we can publish here is our wine battle. How did our wine choices fare against hers? Bafflingly, she hadn’t gone to Asda.

Our Riesling (name of which we can’t remember) scored a rather respectable 3.6 out of five on Vivino. Poor Flo’s only got a 3.4.

“You can’t trust these shit apps,” she shrieked as she smashed the bottle against the table and lunged at Toby’s neck. Jerking backwards, Toby dodged out the way.

“It’s all kicking off!” we shouted at Simon.

“Erm, this is supper club, not fight club,” Simon roared as he took Tony out with a roundhouse kick.

We all took to our seats again, made our apologies and ate some nuts coated in chocolate and finished our last bottle of wine, which scored a pathetic 2.2.

Thanks to Simon who was a thoroughly welcoming host and chose some fantastic food and wine pairings.

Four boys out of five.