Having lived in London for the past six years I was totally under the impression that the very concept of ‘street food’ had been invented here. It turns out people have actually been selling food items outside of restaurants and shops for thousands of years! Who knew?!

With this newly acquired knowledge I decided to stick it to London and get a train to Birmingham.

Birmingham’s one of those places that feckless dullards say “it’s shit,” about whenever its name crops up in conversation. These people have never mustered an original thought of their own and tend to go through life parroting opinions they’ve heard that they think will be socially acceptable to their peers.

Not like me, I have loads of opinions of my own. Don’t believe me? Tweet and ask for one: @FoodieBoys. This ‘not going along with the crowd’ thing can probably be put down to the fact that I’m incredibly well travelled and interesting. Not only have I lived in Vietnam, but I also lived and worked in Delhi for a year. That’s right, Delhi, in India.

You can only imagine my delight when I discovered there was a recently opened Indian street food establishment in Moseley, Birmingham. I booked a table for two and dusted off my Hindi dictionary.

“Bhains ke aage been bajana,” I said as I walked towards the bar.

“Playing the flute to a buffalo is a waste of time.” I said, with my eyes closed, nodding slowly in a wise manner.

“Ek anaar, sau bimaar – one pomegranate is all there is, and a hundred men are sick trying to get it.”

After sitting down and looking at the menu we ordered some drinks, then some food. A tale as old as time – this is commonplace in restaurants.

Being a man, I ordered a pint of lager and my lady woman ordered  a rose cocktail that came in a plastic bag. A lovely touch. I attempted to come up with a suitable anecdote from my time spent in Delhi, India.

“Oh, that’s such a lovely touch. It actually reminds me of a time in Chandni Chowk when… a… when a… erm plastic bag… erm, fell… from the sky and it made me think… about… plastic bags.”

Fortunately the menu offered more opportunities to reminisce, for example with Pani Puri. I looked back fondly on the time in Delhi when this particular treat gave me a few days of watery diarrhoea. 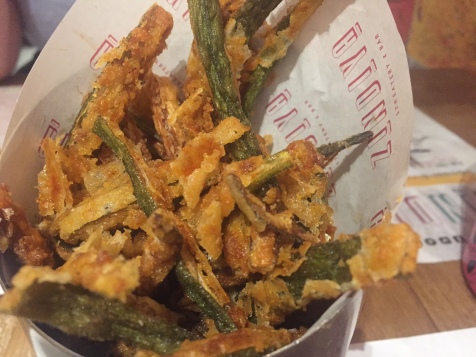 Pav bhaji
I ordered Lady Fingers as I wanted to do an Alan Partridge impression, it goes like this: “Oooh, lady fingers.” Pav bhaji is something I ate in India too, actually in Mumbai.

Sure, I’ve been to Mumbai. Where else have I been I hear you ask? Thanks for asking, I’ve also been to Jaipur, Kolkata, Amritsar, Varanasi and others. Incredible, India.

Seekh kebab
Chicken tikka – now, I like chicken tikka, chicken tikka is good and tasty. I am pleased, NAY, THRILLED to announce that this chicken tikka was delicious. The meat was perfectly moist, and the edges were slightly charred which gave it a lovely depth of flavour.

The seekh kebab was very good too, with a decent level of spice present.

I often think the best part of an Indian meal is the starters, Zindiya with its tapas style Indian street food was perfect and allowed me to talk about myself at length, wonderful.

Four boys out of five.